Seth Mazibuko describes his life in three phases, which he calls the Three Stone Ages: the first stone age was the throwing of stones in Soweto in 1976; the second was the breaking of stones on Robben Island to where he was sentenced; and the third the gathering of stones with the purpose of rebuilding the country.

Seth spoke to the club on the eve of the June 16, 1976 Soweto riots, and gave some background and context to the events that unfolded on the day. Seth was the youngest member of the Student Action Committee at only 16 years of age.

Through his passionate talk and powerful analogy, Seth demonstrated the importance of the event and spoke of the need to deal with the hurt to create hope for the nation.

The only weapon the youth had when the police were shooting and teargassing the protesters, before eventually releasing the dogs, were stones. 481 corpses were eventually counted on that fateful day. They were fighting apartheid. It was said that the tree of liberation was watered by the blood that was shed on that day. 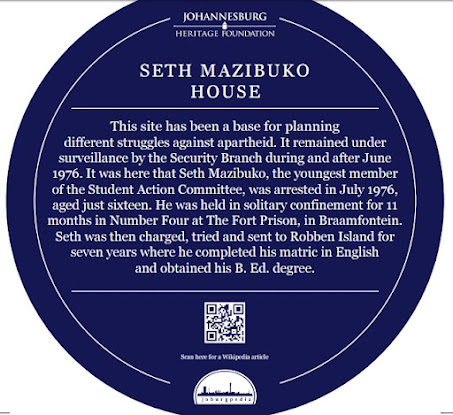 Seth was arrested and taken to the then John Vorster Square where he was tortured and eventually sentenced to seven years on Robben Island. This is where the second stone age took place; the breaking of the stones on Robben Island. Some positives came out of his incarceration as it was there that he earned his Matric and his first degree in Education. In this way he turned the hurt into hope.

The third stone age then took place, namely the gathering of stones; to rebuild communities and companies to build a better future for ourselves. This future should be value driven, as values define us. Let us build and not break. Seth believes in the value of love – to love ourselves.

The Donate a Loo Golf Day is on Friday, 1 July at the Wanderers Golf Club in Illovo. The field is already about 75% full, but members have been asked to sell raffle tickets and to donate prizes for the golfers, which can take the form of bottles of wine, whisky, hampers or goodies that can go into hampers.

Julian's induction as President of the club

Julian’s induction as President of the Rotary Club of Johannesburg New Dawn for 2022/23 is on Wednesday, June 29th at the Parkview Golf Club. The induction of a new president is one off the highlights of every Rotary year and is always a special occasion.

Tickets cost R250, which includes a curry buffet and a contribution towards the venue hire. There will be speeches, official toasts and awards.

National School of the Arts (NSA)

President-elect Julian Nagy proposed that the National School of the Arts had the potential to become a major New Dawn project. This could be achieved through the seedling farm, the painting of various parts of the building, and bursaries for needy students. A committee would need to be formed to get the club involved in these aspects of the project.

After the meeting there is a visit to the National School of the Arts to show RI Director Peter Kyle and his wife the seedling project. DG Stella Anyangwe will also be present, as can be seen on the programme above.

All members of New Dawn are invited to attend. Glen Meyer will be inducted into New Dawn as part of the proceedings. 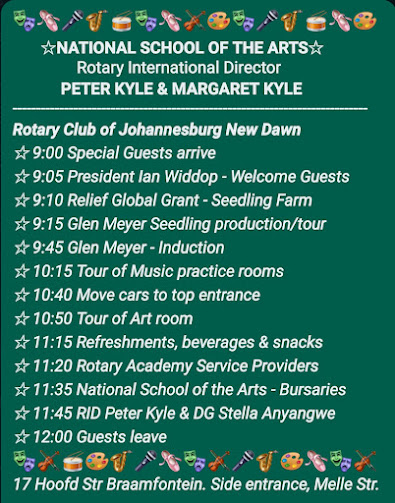 Speaker: The speaker at the meeting on Wednesday morning is Hendri Engelbrecht, who will be talking about the benefits of solar power.

NB: A big thank you to Graham Donet for again doing the blog.

A Thought for the Week: He has the most who is most content with the least.

PrevPreviousLeading Children by the Hand
NextWarm Hearts and Cold DaysNext