Leading Children by the Hand

From its early beginnings as an effort to provide farm workers’ wives with the knowledge and skills to establish and run pre-schools which offered workers’ children opportunities for early learning in a safe, healthy and stimulating environment, the NGO Ntataise (it means to lead a young child by the hand) has grown to become one of the leading NGO’s operating in the field of early childhood development in the country.

Jane Evans, founder of Ntataise and our speaker this week, told the club about their journey which started by providing almost unheard of pre-school education for children from disadvantaged communities.

Ntataise forms the core of a network of early childhood development organisations based in seven of the country’s nine provinces which have over the past forty years offered training and ongoing support to some 20 000 women, reaching in the region of 800 000 children.

Jane started her working life as a reporter at the Rand Daily Mail, ending as editor of the Women’s Page. She started Ntataise on their farm Huntersvlei in Viljoenskraal in the Free State.

She has held positions on several government bodies involved in the early childhood development field as well as serving as a Trustee on several trusts.

In addition to those in the ECD field these include the Helen Suzman Foundation, the St Annes School Board of Governors and The Executive Women’s Club.

In 1988 Jane was made Woman of the Year by The Star newspaper as well as being awarded the Chancellor’s Medal by the University of Pretoria. Jane has a close association with Rotary and was made a Paul Harris Fellow in 1996.

In other news, the seedling farm at the National School of the Arts is now in the capable hands of Glen Meyer, ably assisted by Fralina Malase of the Le Mang Fresh Table. This farm has a capacity of 500 000 seedlings and still has room for additional seedlings. Glen gave the club an update on the project. 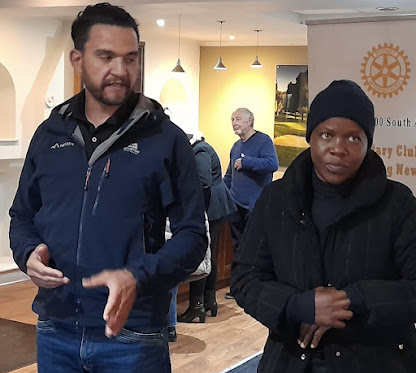 In keeping with the club tradition that the incoming president gets to choose the where and how of his or her induction, Julian Nagy has decided that he wants curry evening at the Parkview Golf Club. The date is Wednesday, 29 June, just in time for the beginning of his year as president.

As ever there will be toasts, speeches and awards and a lot of fun. Just remember, Parkview will be operating a cash bar, but don’t take that too literally and bring your credit card for drinks, as it is a cashless environment.

Raffle sheets were emailed to all members and Helene, Adele and the team at Donate a Loo, whose Golf Day it is, have asked for the help of club members in selling raffle tickets.

The Donate a Loo committee also announced that two toilets have been erected at a nursery school in Delmas in on our of Janice Angove. The children had great fun decorating the outside toilet walls with handprints.

Theme: Peter James-Smith, as our stand-in AG, handed over a banner for the upcoming Rotary year. The theme for the year with the Canadian Jennifer Jones as RI president, is Imagine Rotary.

Floods: The club made a donation of R5000 to Gift of the Givers to help with their efforts after the floods in KwaZulu-Natal.

Shoes: Jeni Lobel’s shoe project is going well, and shoes will be donated to Linda Twala in Alexandra for the community.

NB: A very big thank you to Graham Donet for doing the blog in my absence last week. I have since tested positive for Covid and will miss this week as well.

A Thought for the Week: Give me six hours to chop down a tree and I will spend the first four sharpening the axe.