From Northern Canada to Southern Africa and now to Eastern DRC; that’s the journey our speaker from last week, Allison Furniss, has undertaken en route to a PhD.

Allison told the club that she was born in the town of Whitehorse in Yukon, in the north of Canada. She came to South Africa in 2017 and fell in love with the country. With the help of the Rotary Club of Sea Point and clubs back home she managed to get Rotary funding as a global grant scholar for her Honours and Masters degree at the University of Cape Town.

For her Masters, which she obtained with distinction, she did research amongst the mainly female artisanal miners in the east of the Democratic Republic of Congo near Goma, where they do mainly hand panning for coltan, a mineral used widely in digital technology.

She has now expanded her studies for a doctoral thesis with the help of a scholarship from the Pierre Trudeau Foundation in Canada.

She says about 2 million people are directly involved in the extraction and sale of the black sand-like material, of whom at least half are women. The workers are not paid salaries, but mine for their own pocket and sell the coltan in a free market system.

She says she’s now preparing to do about a year of field work in Goma before tackling her thesis.

Allison was introduced to New Dawn by Helene Bramwell, with whom she recently stayed for a few days as an AirBnB guest. Last week was Helene’s last meeting as interim president, a role which she says she enjoyed and which she performed admirably well.

Seedling project at the National School of the Arts

Helene made a point during her meetings to draw attention to club projects and to members involved in them and how members can go about helping.

One of the programmes she highlighted was the seedling project at the National School of the Arts and Glen Meyer was fortuitously on hand with an update. Glen told the club he was on his way to the NSA to try to set up a crop sharing system with the Leeuwkop prison, where he’s involved with growing crops on arable land belonging to the Department of Correctional Services.

The idea is that Leeuwkop will plant seeds and provide seedlings to the NSA project, who will grow them and distribute an envisioned 500 trays a week.

Glen is very keen to join New Dawn which will quite literally bring the program much closer to home.

Another project that has been receiving attention is The Link, our global grant recipient. For those who weren’t there, the global grant worth almost R450 000 was initiated in 2019 to help The Link set up new teaching posts at schools to help young children to read and write.

Almost half the money is still available mainly because of school closures during the two years of Covid-19 lockdowns, but on their latest newsletter The Link reports that they’re up and running again.

Members of New Dawn and The Link met last week to discuss ways in which the remaining funds can be disbursed.

Jeni Lobel's shoe collection for the people of Alexandra

As usual the big projects are not the only ones that get New Dawn attention. Jeni Lobel has reinstated her shoe collection for the people of Alexandra and quite a few club members have gone through their shoe cupboard to help out. Jeni has bins outside Virgin Active gyms and reports that she’s already collecting by the binful. 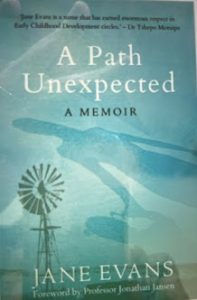 The speaker on Wednesday is Jane Evans, who will be speaking on early childhood development and her memoir A Path Unexpected, which has just been published. The title of her talk will be “The Light in your Eyes” and she will elaborate on making early learning a reality in disadvantaged communities. She will be at the club in person.

Julian Nagy will be president of the Rotary Club of Johannesburg New Dawn for 2022 – 2023 and his induction will be on WEDNESDAY 29 June at the Parkview Golf Club. It will take the form of a dinner (curry will be served) and all protocol will be observed. The invitation with details will be going out soon.

A Thought for the Week: We are what we repeatedly do. Excellence, then, is not an act, but a habit.